During the year we have many special liturgies and events. Here is a sampling from 2017.

Confirmation and Reception of Jeremy Kappenman

On November 19, 2017 we celebrated with Jeremy as he was received into the Catholic Church via the Personal Ordinariate of the Chair of Saint Peter. Scripture tells us to rejoice with those who rejoice and so we welcome Jeremy into the family. Be blessed and know you are loved, Jeremy.

Here are some photos from that joyous occasion: 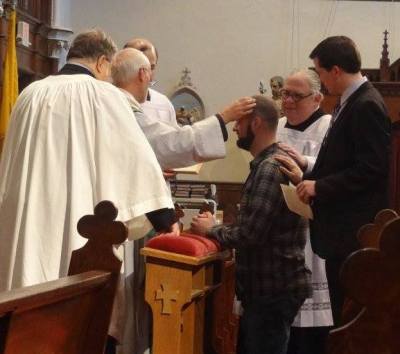 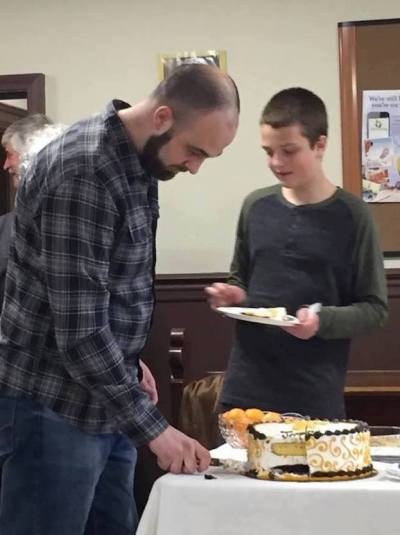 Evensong and Benediction for the Feast of the Transfiguration

This service was held on August 6, 2017 at 5:00 pm in the church of Saint Theresa of Avila at 2078 Centre Street, West Roxbury 02132. Solemn Evensong is one of the greatest treasures of Anglican liturgical life, happily now added to the Universal Church’s Lex Orandi through the work of Saint Pope John Paul II and Pope Benedict XVI. A homily was delivered before the Benediction Service by the officiant, Reverend Father Richard S. Bradford, Chaplain of the Congregation of Saint Athanasius. A reception in the Pavilion immediately followed the service

A poster is for this event is here.

Solemn Evensong and Benediction of the Blessed Sacrament was held on the Second Sunday of Easter, which is Divine Mercy Sunday, April 23, 2017 at 6:00 pm. Father Romanus Cessario, OP, preached the homily, which was featured in the April 2018 edition of Contra Mundum.

Fr. Cessario is Professor of Systematic Theology in Saint John’s Seminary and Senior Editor of Magnificat magazine. In 2013, the Dominican Order conferred upon Fr. Cessario the title and degree of Master in Sacred Theology.

Here is the poster for the event: 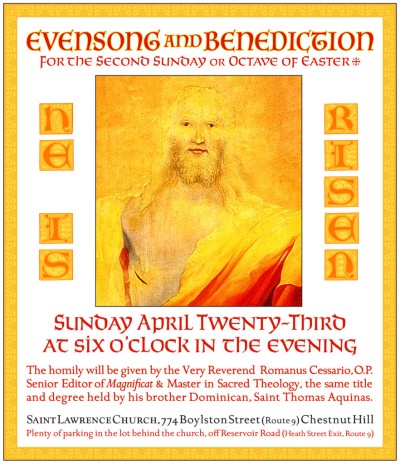 We were very blessed to welcome Reverend Peter M.J. Stravinskas, an old friend of Father Bradford and the Congregation of Saint Athanasius as featured homilist for a three-day Lenten Mission:

Here is a photograph from Saturday’s meditation with Fr. Stravinskas:

Here is a photograph of Fr. Stravinskas preaching at Sunday’s Mass:

THE REVEREND PETER M.J. STRAVINSKAS was born in Newark, New Jersey, on December 25th, 1950; he attended parochial elementary and secondary schools and then entered the seminary in 1968.

Father Stravinskas founded The Catholic Answer in 1987, editing that periodical for seventeen years; in 2004 he founded another journal, The Catholic Response. He has written or edited fifty-one books and more than six-hundred articles. He has conducted retreats and lectured in eighty dioceses of the United States and over a dozen abroad.

He is the founder and superior of the Priestly Society of Blessed John Henry Cardinal Newman, a clerical association of the faithful committed to Catholic education, liturgical renewal, and the new evangelization. Father Stravinskas is also the executive director of the Catholic Education Foundation, an organization serving as a resource for heightening the Catholic identity of Catholic schools. He serves on the Research Faculty of the Maryville Institute in Birmingham, England as well as that of Ocean County College and Grand Canyon University.

Here is the poster for the event.

Feast of Title and Dedication of the Chair of St. Peter

On Wednesday, February 22nd, 2017, at 7:30 pm we celebrated the North American Ordinariate’s Sixth Feast of Title and Dedication on the Feast of St. Peter. The Solemn High Mass was in the Divine Worship form of the Roman Rite, promulgated by the Vatican in 2015 for the use of the Ordinariates, with Gregorian and Anglican chants as well as beautiful hymns. This third form (in addition to the Ordinary and Extraordinary forms of the Roman Rite) restores traditions of English Catholicism and brings treasures from five hundred years of Anglican liturgical life to the Church’s Lex Orandi, all in reverent and beautiful “Prayer Book English.”

We were honored to have as homilist, Father David Barnes, Boston University’s Catholic Chaplain and an old friend of our local Ordinariate community of Saint Gregory the Great. He has a popular blog, A Shepherd’s Post.

A reception followed during which copies of Divine Worship: The Missal, and Divine Worship: Occasional Services were presented to Father Bradford by Kevin McDermott. Father Bradford wishes to thank The Most Reverend Steven J. Lopes, Bishop of the Personal Ordinariate of the Chair of Saint Peter, members of the Chancery, and all who had a hand in making this wonderful gift possible. Their kindness and support is very much appreciated.

Here are some photos from the evening and the poster for the Mass: 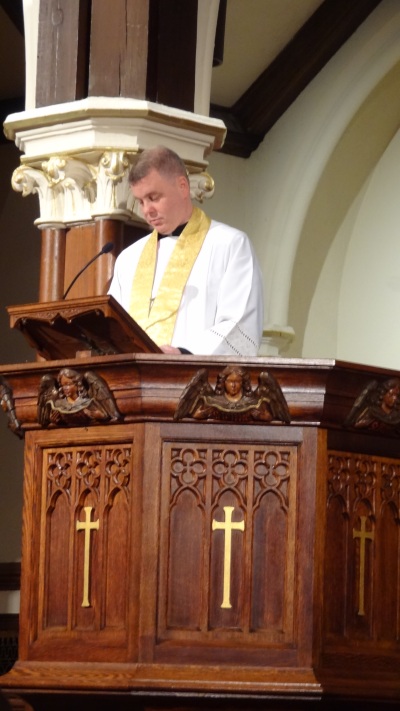 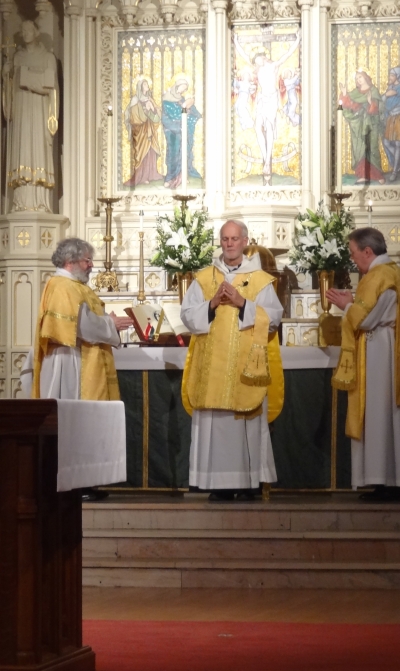 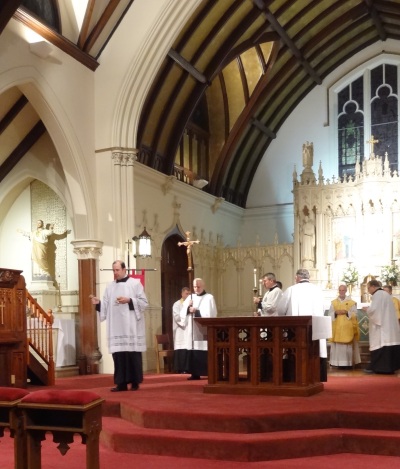 Candlemas and Blessing of Throats

On Thursday, February 2nd, 2017, at 7:30 PM, we celebrated Candlemas (otherwise known as the Presentation of our Lord or the Purification of Saint Mary the Virgin) at St. Lawrence Church in Chestnut Hill. The Liturgy included the Blessing of Candles and Procession, Solemn High Mass, and a homily by His Excellency, Arthur L. Kennedy, Episcopal Vicar for the New Evangelization and long-serving member of the Anglican-Roman Catholic International Commission (ARCIC). Fr. Richard Bradford was the celebrant and we enjoyed a visit from Fr. Jurgen Liias, our founding pastor.

The blessing of throats was given at the conclusion of Mass:

A reception followed in the undercroft.

Here is the poster for the event: